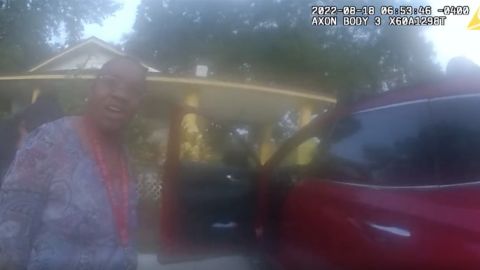 “I voted, but I ain’t commit no fraud,” Romona Oliver can be heard saying on police body cam video obtained from the Tampa Police Department. “I got out. The guy told me that I was free and clear to go vote or whatever because I had done my time,” she said. Oliver’s attorney says she received a voter registration card and thought she was eligible to vote.

The videos, first reported by The Tampa Bay Times, provide a fresh glimpse into a far-reaching state operation earlier this summer to crack down on supposed voter fraud.

On August 18, Florida Gov. Ron DeSantis announced the Florida Department of Law Enforcement arrested 20 individuals accused of illegally voting in the 2020 election. He unveiled the charges at a celebratory news conference at the Broward County Courthouse, where he was flanked by police officers and state Attorney General Ashley Moody.

“As convicted murderers and felony sex offenders, none of the individuals were eligible to vote,” DeSantis said.

“They did not get their rights restored, and yet they went ahead and voted anyway,” DeSantis said at the time. “That is against the law, and now they’re going to pay the price for it.”

“She served her time and got out. And she got out around the time that Amendment 4 was passed, which affected the rights of felons to vote. Her understanding was that felons had their rights restored.”

“She was twice told by the State of Florida and the local Supervisor of Elections, ‘Here’s your voter registration card. You are, as far as we’re concerned, legally eligible to vote.’ And so she voted and she was shocked when she was arrested.”

“She was shocked and upset because she thought her rights had been restored by the amendment. She didn’t know any different. And the State of Florida, she believed, was telling her that she was eligible to vote. And now she’s had the rug pulled out from under her. She never would have voted if she knew that she was ineligible,” Rankin said.

Oliver pleaded not guilty to the illegal voting charge and has a trial set for December in Hillsborough County. County records show she was released on her own recognizance the same day she was arrested.

The Tampa Police Department conducted arrests on behalf of the Florida Department of Law Enforcement, the originating agency for the investigation, a police department spokesperson told CNN.

CNN also reached out to the Hillsborough County Sheriff’s Office, which was involved in some of the arrests.

The arrests marked the first public demonstration of the Florida Office of Election Crimes and Security, a controversial new investigative agency created this year and championed by DeSantis to probe voting irregularities. Created under a sweeping bill passed this year to overhaul voting in Florida, the office was given a staff of 15 to initiate probes and allowed DeSantis to assign 10 state law enforcement officers to help investigate election crimes.

But almost immediately after the state announced the charges, questions began to surface about the arrests and whether the individuals knew they were violating the law when they cast a ballot.

According to state law, it is the job of the Florida Department of State to “identify those registered voters who have been convicted of a felony” and “notify the supervisor and provide a copy of the supporting documentation indicating the potential ineligibility of the voter to be registered.”

In the five counties where there were arrests, the local supervisor of elections office told CNN that the state did not inform the arrested individuals that they were ineligible to vote.

DeSantis continued to defend the arrests and in a later news conference blamed some local election offices who, he said, “just don’t care about the election laws.”

But the Office of Election Crimes and Security wrote a letter to an elections supervisor that the individuals voted illegally “through no fault of your own.” The letter, obtained by CNN, was sent on August 18 by Pete Antonacci, who served as the first director of the Office of Election Crimes and Security until he died September 23 after a medical episode at the Florida state Capitol.

The arrests captured in police body cam footage also are illustrative of the confusion that still surrounds a successful 2018 constitutional amendment in Florida to restore the voting rights of some felons that had completed their sentences.

The constitutional amendment, approved overwhelmingly by voters in a statewide referendum, said people convicted of murder and certain sex crimes were not eligible to have their rights restored.

But the law that implemented the constitutional amendment specified that an ineligible felon who erroneously votes is in violation of the law if they “willfully submit any false voter registration information.” State Sen. Jeff Brandes, a St. Petersburg Republican and the sponsor of that legislation, has said on social media that most convicted felons have no intent to break the law.

After the Tampa Bay Times published the body cam video, Brandes tweeted from his verified account, “Looks like the opposite of ‘willingly,’” and he suggested that state will struggle to prove its case in court.

“I hope they have the courage to drop charges or go to trial and produce evidence of willful intent,” Brandes wrote.

As China moves away from zero-Covid, health experts warn of dark days ahead | CNN